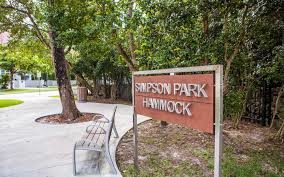 For more than a century, Simpson Park has been serving South Floridians awe and wonder. Urban dwellers need not fret – this natural habitat isn’t far from the city. Look up and spot a Metromover lurking past the branches or a city skyscraper peering through the leaves. In the hustle and bustle of Downtown Miami’s urban living, Simpson Park is the breath of fresh air needed to keep the peace flowing. Let nature be the guide. Here are four reasons to visit Simpson Park.

1. It’s close to the city
Located at 55 SW 17th Road, Miami 33129, Simpson Park is just a stones throw from Downtown Miami and a Metromover ride from Mary Brickell Village. There is ample parking for nature lovers to park the car and access this public treasure. Cyclists are also welcomed. Bring a bike-lock and use the free bike racks to secure your bike’s wheels and enjoy one of the many nature trails in the park. Start at the visitor’s center for mandatory registration and check out the park’s historical cliff notes from 1913 to present.

2. Nature trails & nature watch
To the novice, Simpson Park is simply a city park to catch a moment of serenity. To the naturist it’s teeming with life. With the historical designation of an Old Forest Growth Community, these 7.8 acres serve as the home to 162 plant species including 15 endangered species and 9 threatened species, including Wild Cinnamon, Coffee Colubrina, Yellow Boxwood and the Redberry Stopper to name a few. Bring a friend or the family to walk the trails and discuss the ecology of branches, birds, insects and fauna. Look for tiny natural aquifers that are snuggled into rocks and baby turtles that muster around koi fish enjoying a splash in the pond waiting for the humans who bring them treats. Some uprooted trees mark their territory in the park so be sure to tread lightly while exploring the wondrous yet microscopic ecosystem living on every branch. Bring a picnic basket and make it a date under the lush canopy of tropical hardwood hammock peaking with delicious sunshine that soothes the soul.

3. History & fossils on every trail
For the affectionate lovers of history, nature, and politics – Simpson Park delivers. Once called Jungle Park, it was founded in 1913 by a progressive group who could see the future ramifications on nature by a soon-to-be metropolis. Preserving the natural hammocks that were dug up to build Brickell, Simpson Park is now one of three last remaining tracts of Brickell Hammock which once ran from the Miami River to Coconut Grove. In 1927 the park’s name changed in honor of botanist and conservationist, Charles Torrey Simpson who was affectionately known as the “Sage of Biscayne Bay.” His own backyard contained a hardwood hammock which he made accessible to more than 50,000 people. Simpson Park is a fusion of man and nature with its wild landscape and man-made koi pond. Journey down the trails and explore the fossils right beneath your feet! Tiny seashells, dried coral and rocks line the trails to create a leveled path. For shell collectors, these are the ones to leave behind so as not to disturb the habitat.

4. Its Free!
Yes, you read right. Who doesn’t like free? Free parking, free entry (with registration in the visitors office) and free guided tours (weekends only with RSVP). Like the old adage states: the best things in life are free.